Have You Been Arrested for DUI?

In the Commonwealth of Pennsylvania, driving under the influence (DUI) is a serious criminal offense that could involve harsh penalties, as well as give you a criminal record. The penalties that can come along with a DUI conviction include: fines, jail time, license suspension, alcohol safety school, probation, the installation of an ignition interlock device, and community service. In Pennsylvania, the penalties for a DUI depend on the number of previous DUIs the individual has, as well as their blood alcohol content (BAC). The legal limit for a driver in Pennsylvania is 0.08.

Can I be Convicted of DUI in Pennsylvania if I was Below a .08%?

Section 3802  of the Pennsylvania Vehicle Code covers the crime of DUI. Section 3802(a)(1) provides a definition of DUI which includes no language on BAC at all. An individual can be convicted under this section so long as they have imbibed “a sufficient amount of alcohol such that the individual is rendered incapable of safely driving…” This means that you could conceivably be convicted of DUI even if you had only 1 or 2 drinks, so long as those drinks were sufficient to render you incapable of safely driving. 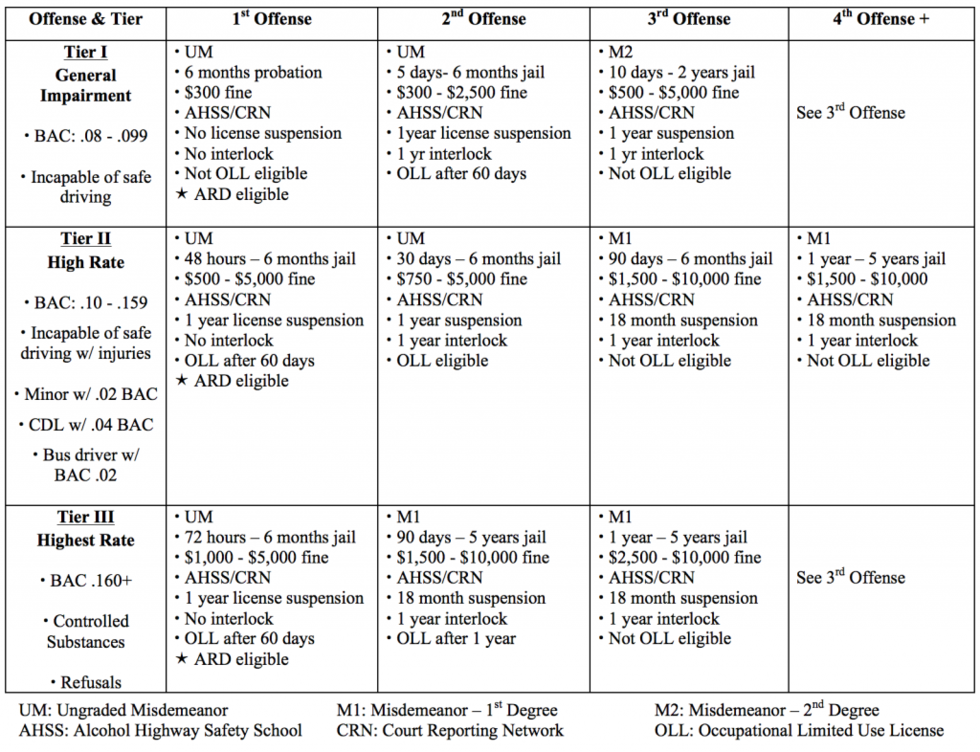 ARD stands for Accelerated Rehabilitative Disposition. ARD is a program for first time offenders. If you are able to successfully complete the program, your case will be dismissed and you can have your record expunged.

The primary purpose of the ARD program is for “first offenders who lend themselves to treatment and rehabilitation rather than punishment and that the crime charged is relatively minor and does not involve a serious breach of public trust.”

Who is Eligible for ARD in Pennsylvania?

Generally, in Pennsylvania a first time DUI offender will be accepted into the ARD program, but there are exceptions. Section 3807 of the motor vehicle code provides that an individual will not be considered for entry into the ARD program if any of the following apply:

What are the Benefits of the ARD Program?

The benefits of being admitted into and completing the ARD program are as follows:

How Does an Individual get into the ARD Program?

Your attorney will submit an application for admission into the ARD program to the applicable District Attorney's Office. Once the DA's office receives your application, and it is approved, ARD court is scheduled. There are several things an individual must do prior to being accepted into the ARD program at their court date, these are:

What Happens After an Individual is Admitted into the ARD Program?

At the ARD hearing, the court tells you what the conditions of entry are, and if you accept them, you are admitted into the program. You must complete your conditions within the term of your ARD program. The conditions for a DUI ARD include things such as:

If you do not agree to the terms of the program, you will not be admitted, and your case will either be disposed of with a guilty plea or a trial.

Generally, for a typical DUI case, the length is usually 12 months. Once you have completed all the requirements of the program, and you have successfully completed the ARD program, your case will be eligible for expungement.

What Happens if an Individual Violates the Terms of the ARD Program?

The answer to this question depends on what the violation is. If you do not complete your community service or pay your fines in time, the court will generally extend the time of your ARD to allow you time to complete your requirements. If this happens, you will have to pay the additional supervision fees associated with the extension. If you get arrested and are facing new criminal charges, you will likely be revoked from the ARD program immediately. Your case will then proceed as normal and be disposed of via guilty plea or trial.

In the Commonwealth of Pennsylvania, the specific consequences an individual faces for a second offense DUI conviction will be based on the individual's BAC. The higher the BAC, the higher the penalties you will face.

The Commonwealth of Pennsylvania structures the three tiers as follows:

With a conviction for a second DUI, an individual will be required to use an ignition interlock device on his or her car. This device, which starts your car after testing and making sure you have a zero or near zero BAC, must be paid for out of your own pocket and usually costs around $1,000.

What is an Ignition Interlock?

In the Commonwealth of Pennsylvania, the Pennsylvania Department of Transportation issues ignition interlock licenses to drivers who have had their driving privileges revoked as a result of a DUI conviction or for refusal to submit to a chemical test. This type of license allows you to get back to driving, but with the restrictions of having an ignition interlock device installed in your car.  The laws for the ignition interlock are found in Section 3805 of the motor vehicle code.

Simply put, a vehicle equipped with ignition interlock prevents a car from starting until the person operating it blows into a breathalyzer-style device. In order for the vehicle to start, the device has to register the individual's BAC below a certain level. If the BAC is above the threshold the vehicle will not start.

Who is Eligible for the Ignition Interlock?

If you have been convicted of a first offense DUI, or are eligible and enter the ARD program, you are immediately eligible to reinstate your driving privilege with the ignition interlock license. If an individual has a prior conviction for DUI, they are eligible to reinstate their driving privilege after they have served half of their suspension. For example, if they have a 12-month suspension to serve, they will be eligible after 6 months. You must keep the ignition interlock on your car for 1 year.

How do you get an Ignition Interlock License and the Device Installed in Your Car?

In the Commonwealth of Pennsylvania, an individual will receive a letter from PennDOT 30 days prior to eligibility, listing their individual restoration requirements. The letter will also include an application and information on vendors where he or she can get an ignition interlock device installed in their car. A dealer licensed by the government must install the device. PennDOT will issue the license once they approve the application and the company certifies the device was installed in your vehicle.

Pennsylvania law requires that an individual have ignition interlock devices installed on each car he or she owns. There is an exemption for economic hardship. If an individual can establish that installing the device on more than one car would cause economic hardship, the court may allow installation on only one vehicle. If PennDOT permits only one car with ignition interlock, the individual can only drive that car.

Can an Ignition Interlock Device Register a False Positive?

Quite simply, yes, it is possible for an ignition interlock device to register a false positive, particularly if the user had eaten spicy food or rinsed with mouthwash directly prior to blowing into the device. Pennsylvania law provides for this possibility, allowing a person to try and blow into the machine again within 10 minutes of the false positive. If they register less than a .08 in that time period, they will not be cited for a violation of their restricted license.

What Happens if you Drive a Car Without an Ignition Interlock When you Have a Restricted License?

In the Commonwealth of Pennsylvania, it is a misdemeanor offense for an individual to drive a car without an ignition interlock when you have a restricted license.

It is also a misdemeanor offense if someone else blows into your ignition interlock device and you are driving, or if you otherwise tamper with the device.

What Happens When There is a Violation of the Ignition Interlock License?

Having the Ignition Interlock Requirement Removed From Your License

For other CDL license holders in their commercial vehicle, a BAC of .04 will put you in the high impairment category.

As you can see, the laws for CDL drivers in a commercial vehicle in PA are quite strict, to go along with severe penalties.

If you or a loved one are DUI charges, call Sklarosky Law today at (570) 283-1200 or use our online contact form and tell us about your potential case. DUI charges can have life altering ramification. Do not wait, call us today so that we can help ensure that your rights are protected.